In support of NAIDOC week, we’re hosting a discussion panel to understand how we should be engaging with Indigenous Australians. Learn from leaders working to bring indigenous engagement to the forefront of their organisation. Submit your questions about engaging with Aboriginal and Torres Strait Islanders in advance and our panelists will share their approach and how they’ve found success.

Mel was an integral part of the City of Logan Summit in 2013 that saw all levels of Government, NGOs, Community Members, Elders, and CALD community leaders come together over a few days to set new community aspirations for education, housing, services, and community.

In her role at Bang the Table, she is trying to improve the framework in which organisations engage with First Nations people.

A little fun fact, Mel has also been a proud representative for the Queensland Indigenous Netball side and participated in the Indigenous Uni Games representing QUT.

Carly is the Community Engagement Officer at Wollongong City Council, and whilst new to the organisation, was able to adapt her process during the COVID-19 lockdowns to engage on the naming of two suburbs in an urban release area which needed to consult with local indigenous leaders.

Scott has developed a draft Aboriginal Community Engagement framework and guidelines for Wollongong Council to ensure that the voices of the Aboriginal community are involved.

Brett was one of the lead developers of the Northern Territory Governments Remote Engagement and Coordination Strategy which has won the International Association for Public Participation (IAP2) – ‘Indigenous Project’ category award in 2016 and was Highly Commended for the IAP2 ‘Australasian Project of the Year’ in the same year.

Brett has been in government since 2003 starting off as an Inspector of Local Government and engaging with 63 remote Aboriginal councils across the Northern Territory and progressively working with government agencies to better engage and coordinate an effort with communities and other government and non-government agencies through various tools including BushTel which holds a wealth of information on Aboriginal communities in the Northern Territory to assist collaboration and knowledge. 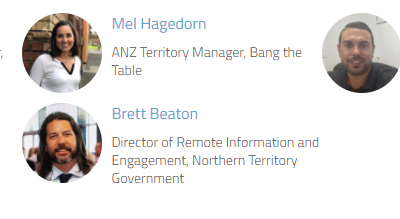